Tribally based efforts can play a significant and positive role by creating increased access to and consumption of healthier foods.

Minnesota is often touted as one of the healthiest states in the nation. While that is indeed true, for many Minnesotans, especially from communities of color, that distinction is not shared. One of those communities is the state’s Native American population. However, thanks to the efforts of a growing network of Native health advocates and organizations, that will change due, in part, to increased access to and consumption of healthier foods, including traditional foods. The Minnesota Food Charter will potentially play a significant and positive role in that effort.

JoAnne Mulbah, the SNAP education program manager for the Minnesota Chippewa Tribe, says that diet has played a significant role in health disparities.  “We have gone from a community that was very active and that depended on harvesting food from the cycle of the seasons, to a community that is largely inactive and that relies on outside food sources.  That has had a direct effect on our health,” she says.

Mulbah and others are engaged in far-reaching efforts to improve access to and knowledge of healthier, locally based foods. Those efforts range from nutrition education incorporated into school curriculums, to traditional gardens, to teaching tribal members how to harvest the natural foods of the forests and lakes and rivers, to increasing knowledge about to prepare healthier foods.

They’ve also been actively engaged in the Minnesota Food Charter effort.  Food Charter Events have been convened in urban and reservation-based tribal communities to gather input on the food and health needs of Native people. One such meeting, organized by Mulbah at the Northern Lights Event Center on the Leech Lake Reservation, was attended by more than 140 tribal members – predominantly elders. The discussion focused on healthy foods and diet and the need to protect the natural environment, including clean lakes and waters— significant resources that provide many traditional food sources for Woodlands tribes like the Anishinaabe, including fish, game and wild rice.

Even with many of the positive changes underway in Native American communities throughout the state, significant challenges remain, especially when it comes to access.  Mulbah says that Food Charter Event participants raised one those challenges—access to retail stores for staple foods.

“Access to quality, commercial foods in our communities is limited by distance, transportation, high rates of poverty, and, in many cases, by the stores themselves,” she says. “In many rural communities even farmers markets are not available. And then there is the question of how do you get there when there is no bus service or taxi service.  Everything becomes a challenge.”

Mulbah says that challenge is something that the Food Charter could help to further explore and potentially help to address.  Simone Senogles, who also helped to organize Food Charter events within the state’s Native American communities, agrees.

“My hope is that the food charter process turns into a document that actually does guide policy makers … a document that carries some weight. People put a lot of thought into it with the hope that their voices would be heard,” says Senogles, food sovereignty coordinator for the Indigenous Environmental Network, an organization that, among other things, works to expand access to and protect traditional Native American food sources.

The need to address health disparities among the state’s Native American populations is abundantly clear when the statistics are considered.  For example, according to the Minnesota Department of Health, American Indian heart disease and stroke death rates from 2000 through 2007 were, respectively, 45 and 29 percent higher than those for whites, while the rate of diabetes-caused deaths for that population was five times higher than for non-Hispanic whites.

But for Minnesota’s Native American populations, addressing healthy food access and affordability is also important from the standpoint of sustaining cultural traditions, bonds and native nationhood.

“So many of the foods that are traditional to Native American communities play an important cultural role,” says Kris Rhodes, executive director of the American Indian Cancer Foundation.  “Those food sources are the foundation of who we are.  One of our creation stories has us coming to the water where the food grew,” says Rhodes, referring to wild rice. 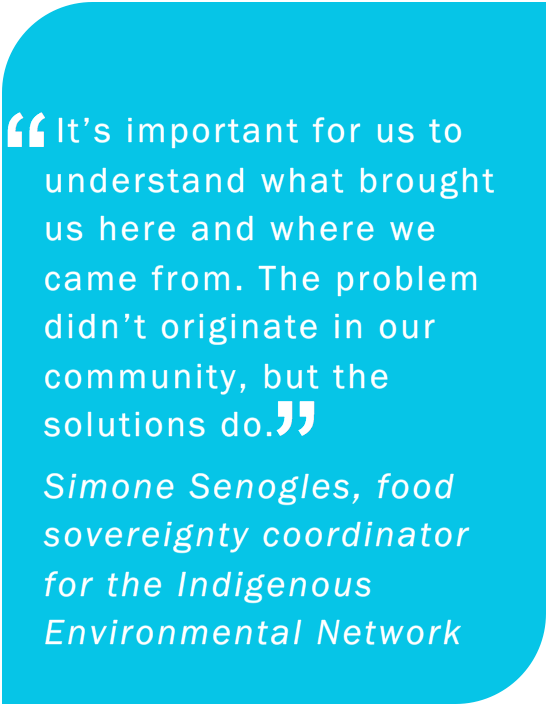 Rhodes is especially excited by the increased prevalence of gardening among the state’s Native American populations, which she says demonstrates an exercise in sovereignty—the basic right and ability to grow and harvest food to feed families and friends.

Senogles adds that that sovereignty will ultimately spread beyond food.  She says that if the state’s indigenous populations regain control of their food system, they will regain their health—both physical and spiritual –and their understanding and relationship with the environment.

“It’s important for us to understand what brought us here and where we came from. The problem didn’t originate in our community, but the solutions do,” she says.