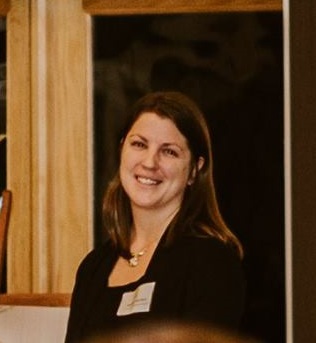 Before the Minnesota Food Charter Network even existed, Noelle Harden was working to create it. For at least six years, she has organized regional events, helped local leaders identify community needs, and listened to people across cultures and segments of the food system.

She calls the work of connecting and convening people with similar interests but different roles “network weaving” or “boundary spanning.” This is part of her job as a health and nutrition educator – she prefers the term facilitator — with U of M Extension. She was previously a grassroots farmer, and holds degrees in sustainable food production and agroecology. She co-leads the Minnesota Food Charter Network’s learning and capacity building team and the engagement team. She’s on the board of the Sustainable Farming Association of Minnesota.

But weaving the connective tissue of a network means working out the knots that develop, such as between fruit and vegetable growers who strive to make a living, and advocates seeking affordability of healthy fresh food for more people. There’s a shared interest in growing the food economy, but different needs.

“I get most excited about working in those complex and tense spaces,” Harden said. The nature of a network, she explains, resists hierarchy or centralization and empowers people and organizations with shared interests to be equal partners.

Such emerging local and regional networks, and the growing number of gatherings both in person and online, give food system folks ways to talk to one another, learn from peers and perhaps feel less alone in their shared interest to build local food economies and make a difference in their communities.

“I think we really need peer to peer learning, people sharing their lived experiences, not privileging certain knowledge systems over others,” she said.

The Minnesota Food Charter Network’s newest online map is one example of the benefits of decentralization.  It’s designed to function as a crowd sourced document; anyone may add or edit their food system project to the map. In this way it becomes a dynamic resource rather than a static database.

Harden says people such as herself perceived as the “expert bestowing knowledge on the good people of Minnesota,” she said with a laugh, need to learn to let go and share leadership and power. So, she stands in the back of the room rather than being front and center at a conference or event, allowing others to take on the roles of teaching and leading.

And, networks prioritize sharing information to create energy around collaboration.

“We did a webinar to share the tools of the food charter network. In last few months we are taking what we learned in our surveys, and have a small budget we are offering to groups that identify common priority learning needs, for example, how to engage in state and local legislative efforts, or bridging the urban-rural divide; all together eight topics were identified as a priority.”

Then there’s money: Typically, nonprofit or community-based food organizations are strapped for cash, relying on donations or grants to stay open. Money flows one way, funneled from decision makers to recipients.

As an alternative, Harden’s passionate about new participatory grant making model called a shared gifting circle that distributes grants – one example being the Action Learning Seed Fund. She says this model disrupts the traditional top-down funding mechanism and empowers participants.

Here’s how it works: Instead of a review committee that decides how funds get allocated, all the fundraising pitches are made to the group of those seeking funding, the group decides after a thorough process which projects will be funded and with what amounts. The process, though transparent and egalitarian, can be difficult for participants, she cautions.

“It is not all holding hands and kumbaya,” she said. “There is palpable tension when it is time to get out the worksheet and allocate the funding. I have even seen people walk away not happy but then a week later when it sinks in, say how powerful it is to make the decision yourself. It’s a shift for someone who is constantly applying for grants; to be the gifter is really transformative.”

Harden says it’s exciting to develop Extension and the Minnesota Food Charter Network as a space of change within the food economy that’s common ground for so many Minnesotans.

“I see people who are really different from one another come together. In other spaces in society that is a rare thing,” she concludes.