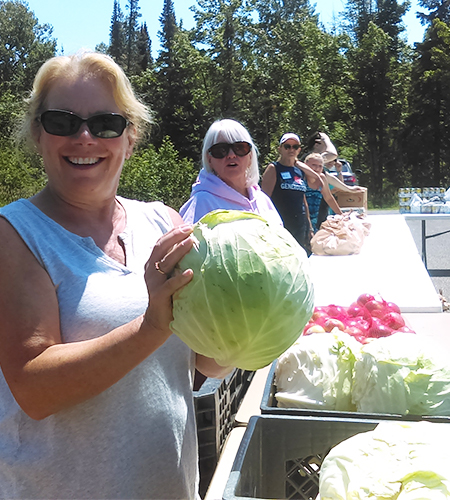 Michelle Miller, executive director of the Two Harbors Area Food Shelf (THAFS), recalled the day she met a mom making her monthly selection there, with two young kids who were visibly (and audibly) excited to see bananas and apples in their cart.

“The kids were like: ‘ ‘Nanas!’,” Miller said. Meanwhile their mother explained that although her children love fruits and vegetables, they’re the first thing cut from her grocery list because they’re too expensive. ”It broke my heart. It’s what really prompted me to make it a priority to ensure we have fresh produce every distribution day.”

To that end the Two Harbors food shelf, which serves 8 ZIP codes in and near Lake County, has developed a thriving community garden in recent years and lately Miller has creatively brainstormed new opportunities to market and distribute healthy food by partnering with local businesses and suppliers.

Volunteer involvement is a cornerstone of the community garden since its inception seven years ago. Lake County master gardeners helped plan and prepare the first beds. This year they produced a new handbook about what to grow and when to plant including tomatoes, cucumbers, leafy vegetables, strawberries, potatoes – but no sweet corn in the short North Shore growing season.

Today more than half the beds are tended by food shelf program participants. Church and civic groups such as Rotary and the Girl Scouts tend beds in order to donate food. All gardeners are encouraged to donate any excess.

“We have novice gardeners, master gardeners, those who don’t have space in their own area. It becomes a community space. It’s so fun, people wave to each other as they pull in the parking lot,” Miller said.

Community involvement extends into partnerships with local businesses such as Super One, a Two Harbors grocery store. A few times a week volunteers “rescue” what’s called “distressed’ produce – fit to eat but not so pretty to sell – for the food shelf.

“We get green peppers and pineapple and stuff I could never purchase,” Miller said. “I also purchase at cost things like green beans and apples and green bananas, usually $200 to $250 a month.” Also, it’s a lot easier for volunteers to pick up food a mile away than to make the 80-mile round trip to Second Harvest Northern Lakes Food Bank in Duluth.

Second Harvest is a reliable partner and THAFS’s main supplier but Miller said that recently some items are scarcer at the food bank – even staples like canned tuna and peanut butter – and costs are rising. (Her theory is that as technology streamlines grocery ordering and distribution, excess that would have been donated to food banks declines.)

Still, last year the food bank had a summer surge of donations it couldn’t store, offered at a price Miller couldn’t refuse — but she didn’t have storage either. So she and Second Harvest staff came up with the idea of a free food giveaway day. They called it Community Food Share, and it was open to anyone. United Way offered support.

Again, volunteers were key to success, Miller said. “Our youngest was 7 and our oldest was in their 70s. Moms and sons, grandparents and their grandkids. Our police officers. Business owners. It truly is a community event.”

The event was such a hit they repeated it this year on June 27, with Coop Light and Power of Two Harbors donating funds to help buy food and promote it. Almost 10,000 pounds of food – canned goods, bottled water and lots of fresh produce – was distributed by 43 volunteers to 114 households in two hours. Of those, 55 families were not in their database. Miller was happy to reach new people who may not have known of the resource – or been too proud to seek help.

“I wanted to take away the stigma by calling it Community Food Share. It breaks down barriers. We don’t check identification and income that one day. People can do a proxy if needed. It is a cool way to get food out to those who would not otherwise come to food shelf,” Miller said. 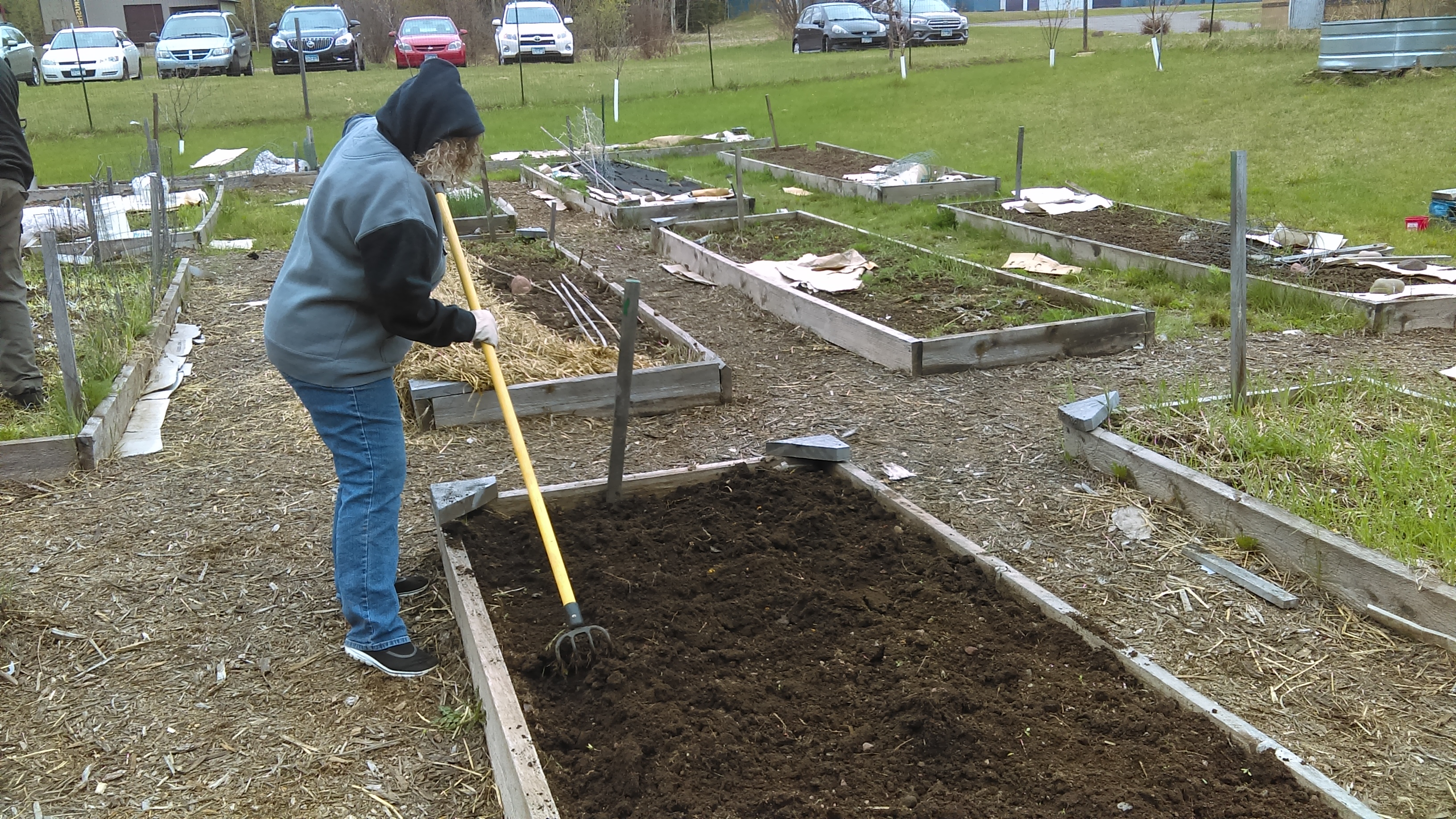 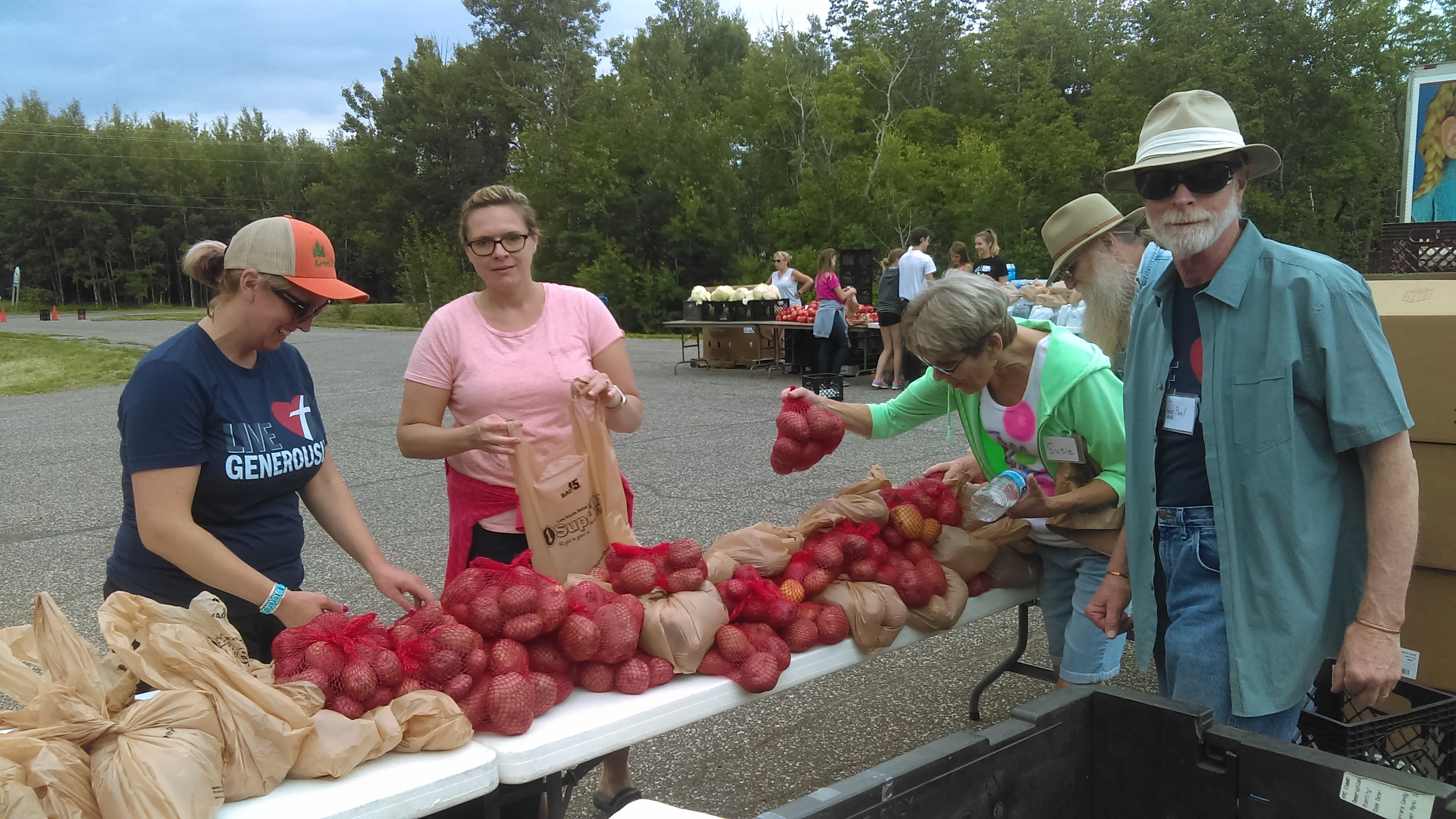